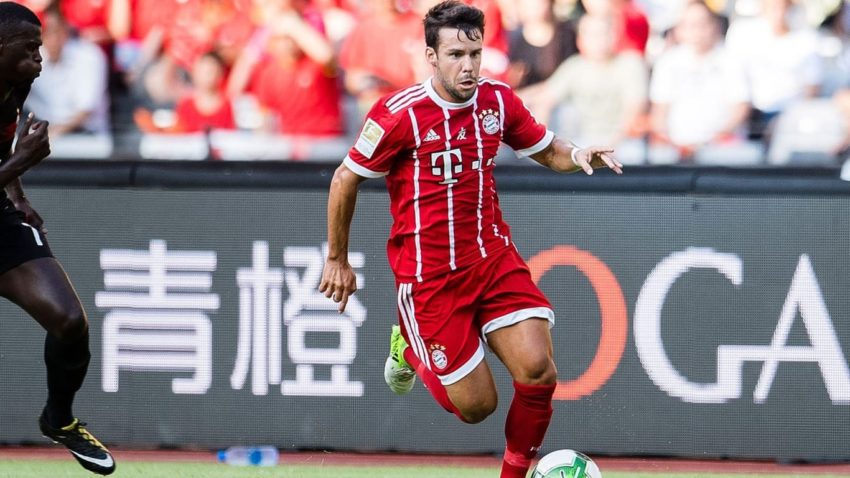 Juan Bernat is an incredible player. Can we say that he is the most underrated player for Bayern in the last years, or is the fact that he’s sitting on the bench a normal thing for him?

Juan Bernat Velasco arrived in Valencia in 2000, when he was only 7 years old. He went through all of the lower categories of the Valencia team before he got to Valencia’s second team – Valencia Mestalla. His meteoric progression led him to the 2011 – 2012 preseason, when for the first time he trained with the first team, although he had already made his debut in the previous preseason friendly game against the team from Valencia province – UD Alzira.

The same preseason, Bernat became the team’s newest jewel, playing excellent football and managing to score two goals. With the same games, the player earned the confidence of his coach, Unai Emery, and finally making his officially debut in the first game of La Liga against Racing de Santander, on 27 August 2011.

However, after that debut, Bernat was ostracized and did not return to play for the first team until January 2012. At the end of the season, the youngster finished the campaign with a total of 10 official matches. The following season, Bernat was left on the bench by the new coach, Mauricio Pellegrino. However, with the arrival of Ernesto Velverde, Juan began to play as the starting left back, playing very good matches – finishing the season with 14 official games and a goal in the Copa del Rey.

For the first games of 2013 – 2014 season, Valencia did not have any specific starter for the left back position, since Jérémy Mathieu acted as a central defender and Aly Cissokho had been transferred to Liverpool. For that reason, coach Miroslav Djukic made him a starting left back, changing his original – left midfield position. Despite the change of coach and the arrival of Juan Antonio Pizzi, Bernat remained in the starting 11 thanks to his pace, great ball control and high work rate.

The 2013 – 14 was, without a doubt, his best, since at only 21, he played a total of 49 official matches, scoring two goals. He was often compared to his predecessor at Valencia and  competitor for the left back spot in the national team, Jordi Alba. There are striking similarities in the steps both have taken to grow as a player. Both of them started out as a dynamic and paced left wingers who have now shifted to a more defensive role at the left back position.

His excellent career and his great campaign, drew the attention of the scouts of Bayern, and he was transferred to München for the 2014/15 season for 10 M euros.

In his first season under Guardiola, he was in a transition period, but still played a whooping 49 games while really becoming a squad player. But still, he was not “unleashed” – often used at different roles – wide in defense, in the midfield and on his first position – on the left-wing. But this was not surprising given the fact that Alaba was injured many times in the same year. Also, Pep was trying to give David playing time in the midfield, so this isn’t as good of a direct comparison because positional opportunity makes a big difference with regards to passing and defensive metrics. Still, when we look at the stats, they are saying that Bernat was not so far behind Alaba:

While he was for me, an excellent player in the 2014/15 season, the next year Juan suffered a bit of a sophomore slump in the 2015/16 season. He missed half of the fall campaign injured, but despite being fit throughout the spring, he struggled to assert himself as he had in his first year at the Allianz Arena. He was not so good while the team was struggling and even he was not so impressive in the easy games. There were a lot of expectations from him. Why was there a question about his performances? Because Alaba was one of the best Bayern players in the same season. The same year they said that he is “one of football’s most versatile talents” and “perhaps the best full-back in the world.”

It’s hard to compete with that, isn’t it ?

True, he had his stumbles in the Champions League, but this ranking is based on Bundesliga performance, wherein Alaba was regularly excellent. Against Bremen, Stuttgart and Schalke especially, he was superb. On the left and in the center of defense, in retrieving the ball and bringing it forward to pass or shoot, he can do it all.

While David was at his best, Bernat struggled not only when Bayern did – (the 2-1 loss to Mainz and 1-1 draw with Mönchengladbach for example) but even at times when they won rather comfortably – (Bernat had a poor game in the 5-1 win over Wolfsburg and was substituted with his side a goal down). Statistically, he was still in all Top 10’s (LB’s) in the 15/16 season, but Alaba showed that he is one of the best in this position in the same year.

The next episode: Carlo Ancelotti

Carlo was trying to use the players on the right and left side more as full-backs instead of wing-backs – and the role was suiting Bernat more than Alaba. Under Pep,  we talked for Alaba as one of the “most complete” footballers in the World, and “the best left-back”. But, after the Pep era I was thinking, about Jupp’s  2012-2013 season, where the full-back had similar roles and Alaba was a beast and perfect for the position.  He was one of the most determined and focused players on the pitch – (in fact a scene from 2012 is still fresh in my mind vs Madrid – Alaba caused a penalty and Real scored. In the following action he beat everyone on the left-wing and created a goal scoring opportunity for Robben to make up for his mistake).

With Carlo in charge,  Alaba wasn’t that focused and determined to win and this could be due to mental fatigue and knowing that he’s on a certain level and therefore has stopped pushing to the limit.

Bernat probably understand that, and he gained more confidence. He played excellent in the last months of 2016-2017 season, and even in one point of the 2017-2018 preseason it looked that he can take some minutes for David but he suffered ankle ligament injury at the end of July 2017 and missed 105 days and the first 18 Bayern games. Carlo was sacked,  Jupp came and Alaba was playing well again, so he missed the momentum to shine.

With that being said, when Bayern needed the Spaniard to perform – he was reliable – if not spectacular. With similar to Alaba’s numbers, why we should not say that Bernat is also one of the best ?

Also, let’s not forget tha Alaba played significantly more minutes in the midfield for Pep. Attacking score is naturally higher for the midfielders than for the defenders.

Maybe we’re not realizing how underrated and important player Juan is for us.

Stats are per 90 minutes. Total score includes not only the attack and defense stats,but also:possession score,goals,assists and discipline score.